Getting to Know the Taylor Family

New York: the city of dreams. For Joe Taylor, his dream definitely came true when he asked his wife, Autumn, to marry him in the Rose Club at the Plaza Hotel in 2013.

“She was completely surprised!” Joe said. “We walked around New York City on Cloud Nine and ended our night celebrating at the rooftop bar of the Peninsula on Fifth Avenue.”

The trip to New York was initially a surprise excursion for Autumn’s son, Alex’s, 18th birthday. During the trip, Joe, Autumn, and Autumn’s two sons, Alex and Christopher, enjoyed walking around the city and seeing sites like Grand Central Station, the Empire State Building, the Statue of Liberty, and Central Park. By the end of the trip, the family was celebrating both a birthday and an engagement in one of the biggest cities in the country. 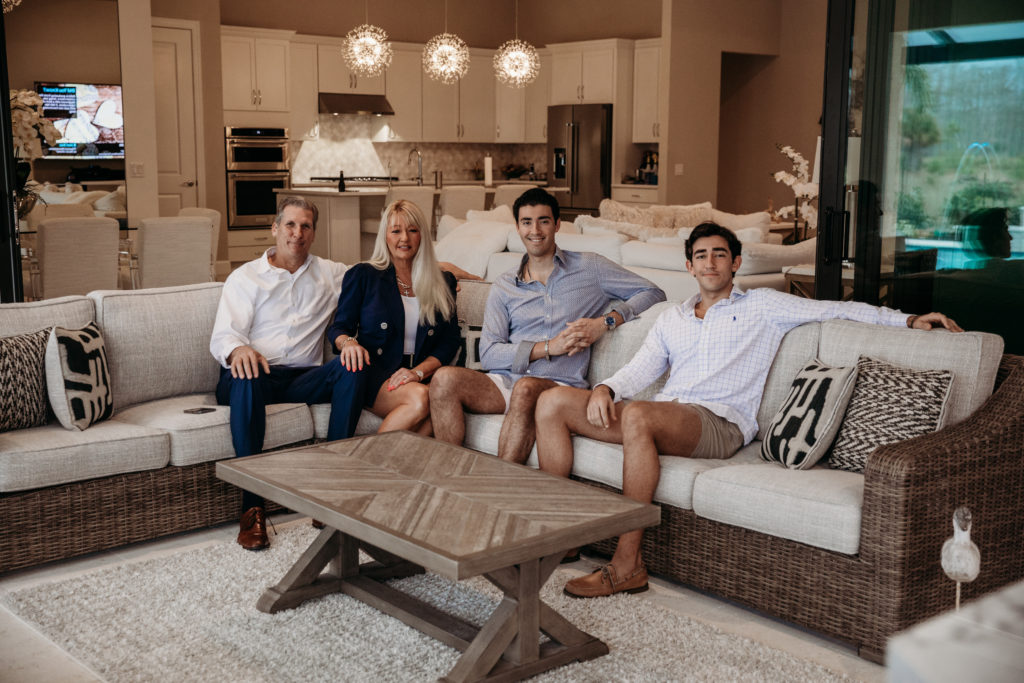 Joe and Autumn got married a year later and held the ceremony at Miromar Lakes, which is where they lived at the time. As the family joined together, it became increasingly clear that there was something all of the individuals had in common: they each had a knack for business and started young at developing their careers.

When he was living in Arlington, Texas, Joe began working as a bagger at a local Kroger store when he was 16-years-old. While studying business at the University of Texas at Arlington, he became the youngest produce manager and quickly rose to the management ranks during
his nine-year Kroger career.

“After reaching the position of store manager, I realized I was ready for new challenges,” Joe said. “The next chapter for me included becoming Vice President of an oil and gas exploration and development company and the founder and operator of two mortgage brokerage companies. One was in Denver, and in 2002, I moved and started another one in SWFL.”

Like her husband, Autumn also began her career at a young age. At 18-years-old, she got involved in real estate and began working for several prominent builders. Today, she has a total of 30 years of experience in the real estate field. For the past 18 years, she has been a REALTOR® and is currently with Premier Plus Realty Luxury International.

“I am passionate about real estate,” she said. “I start my day reviewing every new listing in the area. This has helped me become very knowledgeable about SWFL’s communities, builders, and floor plans. I love helping my clients with advice on remodeling, staging, or decorating.”

Alex and Christopher followed in Joe and Autumn’s footsteps, establishing their place in the technology realm as young adults. When he was just 19-years-old, Alex started a laptop refurbishing company, which he ran out of his garage. He now has expanded to a commercial space and brought in Christopher two years ago to help with managing daily operations and growing the company. 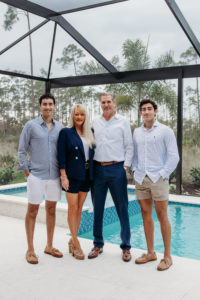 The business, AAA PCs, is a registered Microsoft refurbisher and has currently refurbished, sold, and shipped over 20,000 laptops with sales approaching $10 million. According to Joe, they are a top-rated seller on eBay with a 100 percent satisfaction rating.

Prior to joining his brother’s business, Christopher was a student at Estero High School. He graduated in 2020, and though the pandemic changed a bit of Christopher’s senior year experience, including the cancellation of commencement and senior prom, he still made the most of his high school career.

“Christopher played saxophone in the jazz band, and he lettered in weightlifting, tennis, and football,” Joe said. “Autumn and I never missed a football game during his junior and senior year. He worked harder than most and earned a starting spot and made some key plays, including a game-winning touchdown.”

Christopher isn’t the only tennis fan in the family either. Some of the family’s favorite parts about their community are the tennis amenities and tennis culture the neighborhood fosters.

“I am proud of our WildBlue tennis community. The men’s and women’s tennis teams both made the playoffs in our inaugural season,” Joe said.

The Taylor family built a home in WildBlue and moved to the community in April 2021. They love the community’s location, future amenities, and the floor plan they chose. Autumn has especially enjoyed adding her own design touches throughout the build and many after, as well.

“We love WildBlue!” Joe said. “We are getting to know our neighbors and love the comradery. There is talk of a block party soon. We look forward to our clubhouse being completed so we can socialize with our great neighbors. I also plan to start a WildBlue car enthusiast group where we meet at the clubhouse and then we all drive to a ‘cars and coffee’ or car show.”

On top of starting a car enthusiasts group, the family is also looking forward to continue partaking in activities around their neighborhood and SWFL. They especially enjoy boating, fishing, and entertaining friends and family.

“Autumn is an amazing cook and loves to please her family at mealtimes, which sometimes includes her mother or my father, who both live in the area,” Joe said.

The Taylors also like traveling, and they hope to do more of it in the future. Around Florida, they often visit the Keys, Miami, the Clearwater area, and theme parks in Orlando. Autumn and Joe also like to go to the Baha Mar Hyatt in the Bahamas.

Autumn says that the Baha Mar Hyatt is easy to get to. “After a quick drive to Fort Lauderdale, it’s only a 30-minute flight into Nassau,” she said. “Within a few hours, we are enjoying Caribbean beaches, five-star restaurants, and the newest and largest casino in the Caribbean. The Bahamian people are gracious hosts and sometimes we visit a couple of times a year.”

Family pets Sophie and Niko are also fans of the neighborhood and the surrounding Estero area. 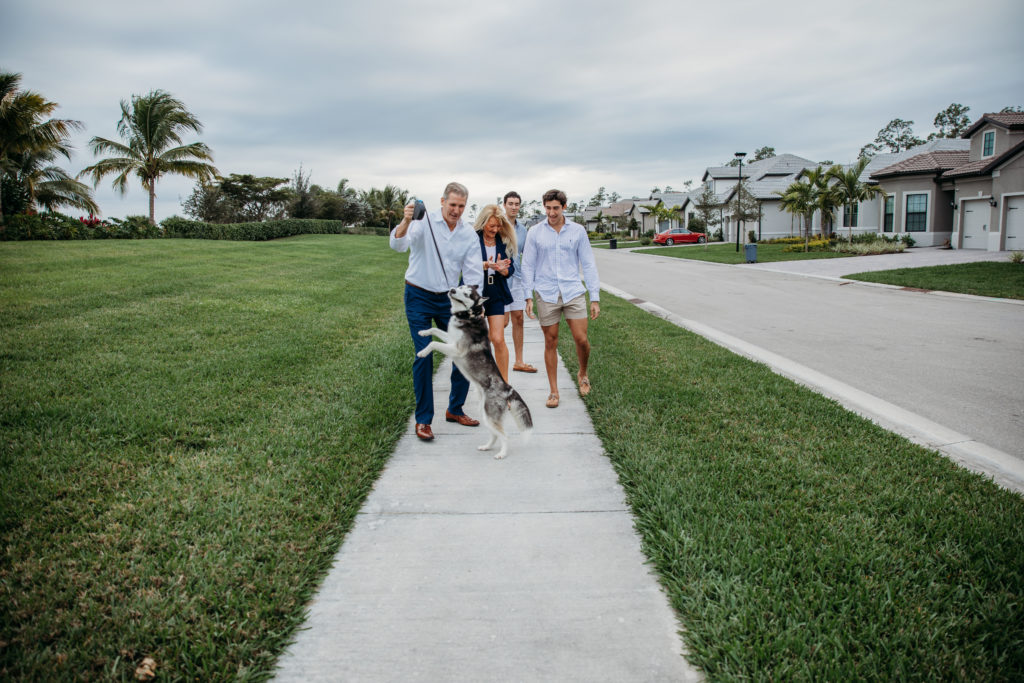 “We have a cat named Sophie and a Siberian Husky named Niko,” Joe said. “Niko is two-years-old and talks to us, as Huskies do, and is well-mannered around people and other dogs. It’s probably because we take him to the dog park often and sometimes for all-day play at Pet Paradise. When we go away, he gets a suite. We refer to Pet Paradise as the ‘Doggy Hyatt.’”

Throughout the years, the Taylors have lived in many communities in SWFL, but none quite fit them as much as WildBlue does. With their new home, the Taylor family has everything they need to build even stronger community ties.

“We love Estero, our country, and our neighbors. We love these communities because let’s face it, Estero is the friendliest place around,” Joe said.